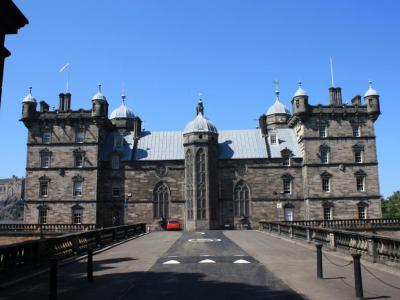 The school's main building – a turreted structure surrounding a large quadrangle, built out of sandstone – is notable for its Renaissance architecture. The foundation stone is inscribed with the date 1628. The intricate decoration above each window is unique (with one paired exception - those on the ground floor either side of the now redundant central turret on the west side of the building). A statue of the founder can be found in a niche on the north side of the quadrangle.

***Harry Potter Tour***
When seen for the first time, the castle-like George Heriot's School usually strikes the onlooker with its resemblance to Hogwarts. Indeed, this private educational institution relies on the same House system to sort students as the famous School of Witchcraft and Wizardry did, sorting its young wizard pupils as Ravenclaw, Slytherin, Gryffindor and Hufflepuff, and perhaps it had inspired J.K. Rowling, whose children also attended George Heriot’s School!

Another reason for speculation about its inspiration behind Hogwarts is that, similarly to Greyfrier’s Kirkyard, the George Heriot School can be seen from the windows of the Elephant House Café, which J.K. Rowling used to frequent while writing Harry Potter.
Image by Stephencdickson on Wikimedia under Creative Commons License.
Sight description based on wikipedia