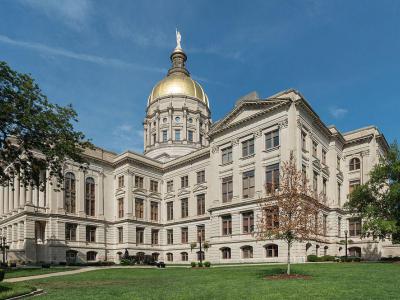 The Georgia State Capitol is an architecturally and historically significant building. It has been named a National Historic Landmark and is listed on the National Register of Historic Places. It is the primary office building of Georgia's government housing the offices of the governor, lieutenant governor, and secretary of state on the second floor, and on the third floor, chambers in which the General Assembly, that consists of the Georgia State Senate and Georgia House of Representatives which meets annually from January to April. The fourth floor houses visitors' galleries overlooking the legislative chambers and a museum. A statue of Miss Freedom caps the dome.

Like many U.S. state capitols, the Georgia State Capitol is designed to resemble the Neoclassical architectural style of the United States Capitol, in Washington, D.C. Former Confederate general Philip Cook. was a member of the commission that oversaw planning and construction of the building. The commission engaged architects Willoughby J. Edbrooke and Franklin Pierce Burnham, of Chicago to design the building and Miles and Horne of Toledo, Ohio for construction. Work completed in March 1889. Sculptor George Crouch executed all the ornamental work on the building.

The Capitol faces west on Washington Street. The façade features a four-story portico, with stone pediment, supported by six Corinthian columns set on large stone piers. Georgia's coat of arms, with two figures on each side, is carved on the pediment. The Capitol's interior represents the 19th-century style of its time. It was among the earliest buildings to have elevators, centralized steam heat, and combination gas and electric lights. Classical pilasters and oak paneling are used throughout the building. The floors of the interior are marble from Pickens County, which still produces marble today.

The museum within the Capitol, in existence since 1889, houses extensive collections representing the natural and cultural history of Georgia. Native American artifacts, animals, rocks and minerals, and fossils illustrate the diversity of the collections. Removed during restoration or renovation, most of the collection remains in storage. The portraits of governors, statues of famous Georgians, and historic flags from many wars are displayed throughout the Capitol.

Why You Should Visit:
Great place for those with an interest in Georgia history, politics, or buildings with golden domes.
Surrounded by lushly landscaped grounds with large hardwoods that are home to several varieties of hawks.

Tip:
Start on the fourth floor, where the museum is, and work your way down to the main level.
Take a photo ID or copy of passport, as you need it for entrance.