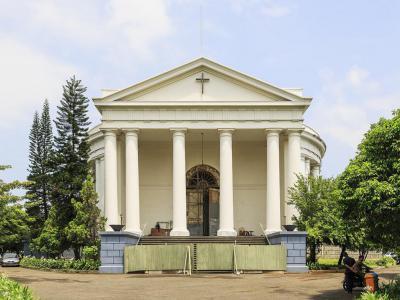 A classic building in the Palladian style with Roman and Greek elements, the Immanuel Church is the oldest Protestant church in Jakarta. Formerly known by the name of Willemskerk in honor of King Wilhelm I of the Netherlands, the church was built in 1835 under the rule of the above mentioned king. The church’s name was changed to Immanuel (“God be with us”) in 1948, after Indonesia gained its independence.

From an architectural point, the Gereja Immanuel boasts an incredible equilibrium and symmetry which give rise to an elegant and imposing silhouette. The building is structured on two stories, with the first one used for the religious ceremonies and the second one hosting the old organ (dating back from 1843).

Apart from the imposing architecture and the old, yet functional organ, a highly sought for attraction is the Bible printed in 1748, one of the oldest exemplars in the world.

Visits inside the church are permitted, but in order to fully experience the feeling this old church gives you and hear the organ play, it is recommended to attend a service here. The service is held in Bahasa Indonesia, English and Dutch.

The Gereja Immanuel is located near the Gambir Train Station, in the Gambir neighborhood, central Jakarta.
Image by oulinai on Flickr under Creative Commons License.