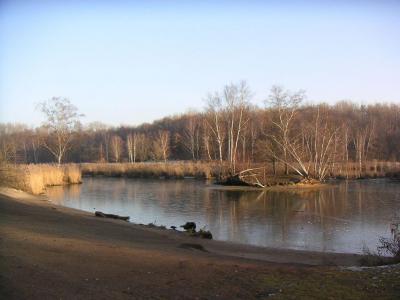 The Deutsches Stadion, or German Stadium, was a monumental stadium designed by Albert Speer for the Nazi party rally grounds. Its construction began in September 1937, and was slated for completion in 1943. Like most other Nazi monumental structures however, its construction was interrupted by the outbreak of World War II and never finished.

According to Speer himself, it was inspired not by the Circus Maximus in Rome but by the Panathenaic Stadium of Athens, which had impressed him greatly when he had visited it in 1935. Speer's stadium was a gigantic inflation of its Greco-Roman model, from which he borrowed the horseshoe configuration and the propylaeum, now transformed into a raised, pillared, temple-like structure (Säulenvorhof) attached to the open end of the stadium by an internally pillared courtyard.

Since the stadium was not set like the Panathenaic Stadium structure at the bottom of a gully, but on a flat area of land (24 hectares), its five tiers of seats for 400,000 spectators had to be supported in the usual Roman manner by massive barrel vaults. Speer apparently adopted a horseshoe shape for his building only after rejecting the oval shape of an amphitheater. The latter plan, he claimed, would have intensified the heat and produced psychological discomfort, a comment he does not elucidate.
Image by BArchBot on Wikimedia under Creative Commons License.
Sight description based on wikipedia