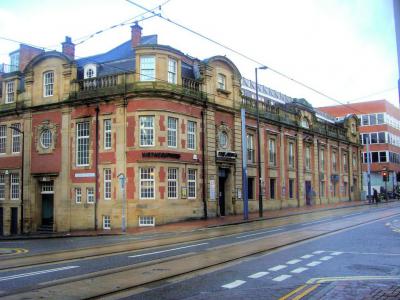 Glossop Road Baths originally housed a swimming pool and Turkish baths. The first public baths in the city were opened on the site in 1836, following the cholera epidemic of 1832. The complex was rebuilt from 1877 to 1879 to a design by E. M. Gibbs, including an indoor swimming pool was opened, a Turkish bath suite and a hairdresser In 1898, the complex was bought by the city council and a ladies' bath was added. The facade was rebuilt in 1908-1910 by Arthur Nunweek. After a period of decline at the end of the 20th century and later closure of the baths, the building was largely converted to residential accommodation, with a Wetherspoons bar called "The Swim Inn" in the former main swimming pool area. The Turkish baths were fully modernized and reopened as Spa 1877 in 2004.
Image by Mick Knapton on Wikimedia under Creative Commons License.
Sight description based on wikipedia