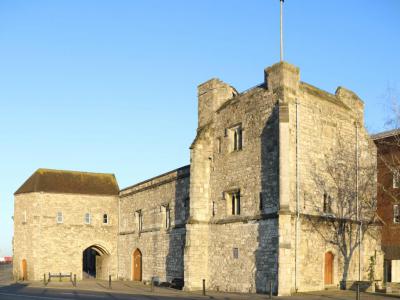 God's House Tower is a late 13th century gatehouse into the old town of Southampton. It stands at the south-east corner of the town walls and permitted access to the town from the Platform and Town Quay. It is now an arts and heritage venue, and has previously served as the town gaol and housed the Museum of Archaeology. The building is Grade I listed and a scheduled ancient monument.

The gatehouse and tower are built of stone "rubble" and are two or three story high. The arched gateway had a double portcullis, the grooves of which are still visible. The windows are described as "trefoil or cinquefoil headed lights". Under the main tower, the filled in arches of the tidal moat and sluices are visible on both the southern and northern flanks.

In the upper story of the Tower and the connecting gallery there are a series of two-light windows and keyhole-shaped gunports. These were unblocked in the late nineteenth century when the window tracery was also restored. The roof of the tower is modern.

The original gatehouse was a simple affair, built in the late 13th century and known as the Saltmarsh Gate, as it led to marshlands outside the town. Being close to God's House Hospital, which had been founded in 1168 by Gervase le Riche as a refuge for travelers, the gateway became known as the God's House gateway. Following the French raid on the town in 1338, the town's defense were strengthened and the gateway was reinforced.

The tower was further extended in 1417 by the addition of a two-story gallery and a three-story tower, to the east of the gateway; this was one of the earliest forts built specifically to carry cannon and had eight gunports and rooftop firing points.

By the start of the 17th century, the building had fallen into disrepair as the town no longer needed strong defense and in 1707 part of the building was being used as a house of correction. From 1786, it became the town gaol; at this time, the tower was known as the "Lambcote Tower". In 1855, a new prison was opened in Ascupart Street and the prison in the tower was closed.

Today God's House Tower houses an arts and heritage venue, with a permanent gallery about the history of the building. There are also two art galleries onsite showing contemporary art and important works from prestigious South Coast collections.
Image by Geni on Wikimedia under Creative Commons License.
Sight description based on wikipedia