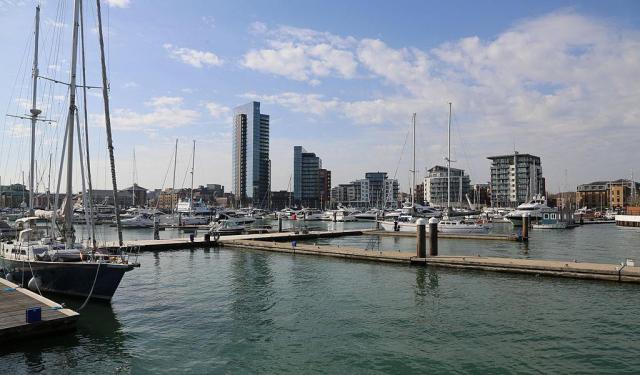 Image by geni on Wikimedia under Creative Commons License.

Southampton is bustling port and coastal city with many historic attractions as well as being an important hub for maritime. Its waterfront area features a wide range of historical buildings, parks, and piers that provides many opportunities for entertainment, sports, shopping, and dining. Check out the best Southampton Waterfront attractions in this self-guided walking tour!
How it works: Download the app "GPSmyCity: Walks in 1K+ Cities" from iTunes App Store or Google Play to your mobile phone or tablet. The app turns your mobile device into a personal tour guide and its built-in GPS navigation functions guide you from one tour stop to next. The app works offline, so no data plan is needed when traveling abroad.

Pilgrims Fathers Memorial, also known as the Mayflower Memorial, built in 1913, honors the Pilgrim Fathers, who sailed from Southampton to America in August 1620. Shaped like a tower, it also contains a small reproduction of the ship that took the Pilgrims to the New World.
Image by Webmink on Wikimedia under Creative Commons License.
2

The Royal Pier officially opened in 1833. Princess Victoria (later Queen Victoria) opened the pier. In 1864, a pontoon was added. In 1871, railway lines reached the pier. The pier underwent a significant renovation in 1892. A pavilion was added in 1894 and hosted events such as concerts, plays, dances, and roller-skating.

The pier and railway deteriorated during WWI when the trains did not run. Train service ended in 1921, but ferries continued to operate.

Throughout the years, the pier has fallen into disrepair and is now derelict. Many plans have been proposed to develop the pier have been considered, some including a casino and hotel. However, the plans have never moved forward.

Image by Geni on Wikimedia under Creative Commons License.
3

Mayflower Park is a wonderful place to sit and watch the ships and boats sail by. Located near the ferry terminal, you can watch the International Boat Show, an exciting Southampton event that runs for about 10 days in late September. It is the perfect place for a picnic with friends and family.
Image by Graham Horn on Wikimedia under Creative Commons License.
4

The first Southampton quay was mentioned as early as 1411 and known as Watergate Quay. In the early 1800s, a newer Town Quay took shape. In 1871, a horse-drawn tramway connected the quay to the railway. By 1876, the tramway was upgraded, and horses were replaced with light locomotives.

Military barges used the quay extensively during WWI. During the 1930s, commercial traffic shifted to other locations, and the quay began handling more passenger traffic.

Today, Town Quay is home to a marina. In addition, the Hythe Ferry operates from the quay, as does the Red Funnel high-speed craft.

Historic quay-side buildings include the Geddes Warehouse. This building has been converted to a boutique hotel and restaurant. The Harbor Board Office was constructed in the 1920s and still stands.
Image by Rosemary Nelson on Wikimedia under Creative Commons License.
5

Queens Park Terrace, located in the center of town, is a very popular attraction. Surrounded by London Plane trees, you will also find the General Gordon Memorial and Reece Ingram’s extraordinary sculpture Organism No.1, which was made from the trunk of a large London Plane tree in 1996.
Image by Hugh Venables on Wikimedia under Creative Commons License.
6

Now converted into apartments, this building was originally the main Post Office for Southampton Docks. Described as "Wrennaissance" style, this is a three-storey red brick building with stone dressings under a hipped slate roof. It comprises a projecting central section with a curved open pediment and projecting sections at each end with triangular open pediments. The central section has pilasters at each side with two pairs of engaged columns through the first and second floors supporting the pediment.

On the first floor, there are twelve sash windows in total, in Gibbs surrounds. On the end sections of the ground floor, there are doorcases set in round-headed arches with coupled engaged Tuscan columns. The central section has a large semi-circular window. The other eight ground floor windows are round-headed with keystones.
Image by Stanley Howe on Wikimedia under Creative Commons License.
Sight description based on wikipedia
7

The South Western House, founded in 1865, is an historic landmark in Southampton. It was designed by John Norton in a French Renaissance style and was opened in 1865 as the Imperial Hotel.

Known as "The Ritz of Southampton", from late 1800s to 1930s, the hotel hosted many rich and famous clients before they boarded the luxury cruise ships at the Southampton port. In 1912, many first class passengers on Titanic stayed here the night before the ship sailed.

Today this beautiful building, with the marble walls, ceiling murals, beautiful ornaments and unique design once again serves as a prestigious hotel with excellent service and beautiful historic rooms.
Image by Mark Rees on Flickr under Creative Commons License.
8

Solent Sky, an aviation museum previously known as the Southampton Hall of Aviation, depicts the aviation history of the city, the Solent area and Hampshire. There is a special focus on the Supermarine aircraft company, based in Southampton, and its famous Supermarine S.6 seaplane and Supermarine Spitfire, designed by R.J. Mitchell. It also provides coverage of the Schneider Trophy seaplane races at Calshot Spit, and the flying boat services in Solent.
Image by Alan Wilson on Flickr under Creative Commons License.
Sight description based on wikipedia
9

Ocean Village is a mixed-use marina, residential, business and leisure development on the mouth of the River Itchen in Southampton, on the south coast of England. Originally the site of Southampton's first working docks, the "Outer Dock" which opened in 1842, the area was redeveloped in 1986 and became the leisure marina it is today. After experiencing a period of stalled development with the late-2000s recession, Ocean Village underwent another series of major, multimillion-pound redevelopment projects. Current recreational facilities include a cinema, cafes, wine bars and restaurants.

The marina is managed and owned by Marina Developments Limited (MDL), a division of British-based Yattendon Investment Trust. The area, formerly used for commercial ships, offers 375 berths and the basin is deep enough to provide mooring facilities for tall ships and large yachts. The Global Challenge yacht races started from here in 1992, 1996 and 2000, and the Clipper Round the World Yacht Race set sail from here in 2011. Ocean Village was also the base for the Royal Southampton Yacht Club until 2018.

A number of companies have offices in the complex, including PricewaterhouseCoopers. The marina is home to the historical building, Enterprise House, which was originally a dock warehouse and has now been converted into serviced offices.
Image by Henry Burrows on Flickr under Creative Commons License.
Sight description based on wikipedia