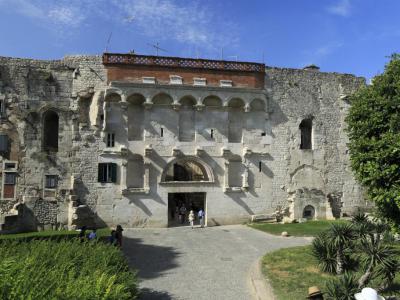 When Diocletian retired he left the empire behind him. He sailed to his sea front villa/fortress. He debarked and entered his palace through the Porta septemrionalis. Or, as some prefer to say The Golden Gate. The gate was designed with double doors for defensive tactics. Or, as some would say then, "propugnaculum."

The Golden Gate ("Zlatna vrata") is one of four gates giving access and egress to the old town ("stari grad"). The old town of course was Diocletian's Palace itself. In the Emperor's time the gate was referred to as "the northern gate". In the middle ages it was known as "Roman Gate." The name Golden Gate was first used in 1553.

On each side of the gate are niches for the statues of the four Tetrarchs, Diocletian himself, and the rulers of the divided Empire, Maximian, Galerius, and Constantius Chlorus. The sixth century church of Saint Martin's is perched above the outer part of the gate.

Most visitors arriving from the harbor side of the Palace will enter through the the South or East Gates although the North Gate, the Golden Gate, was meant to be the main entrance. Today the 28 foot statue by Ivan Mestrovic of Grgur Ninski, Saint Gregory of Nin, looms just outside the Golden Gate.
Image Courtesy of Wikimedia and Falk2.