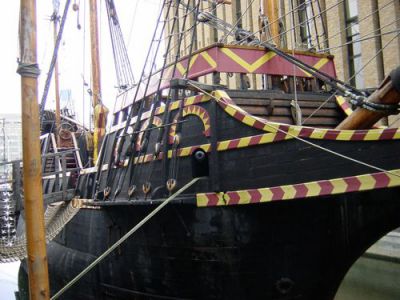 When you want to give your children a treat while you are visiting London – or if you want to treat yourself for that matter, you couldn’t do better than to spend an afternoon, a day, or even a night on the Golden Hinde, berthed in St Mary Overie Dock.

The ship is a replica of Sir Francis Drake’s famous warship, in which he sailed round the world. The Golden Hinde you will visit today was launched in Devon in 1973 and circumnavigated the world many more times than its namesake, before being opened to the public for guided visits or for private hire – the Pirate Birthday Parties are especially popular.

Costumed educators will tell you the history of the original ship, about Sir Francis Drake and all about life onboard for both officers and crew in the 16th century. There are several themes to make sure that everyone has a great time while learning about Elizabethan weaponry and warfare.

The Maritime Workshop arranges hands-on activities where children (or adults) will learn how to measure time and speed aboard a sail-rigged war boat. You can handle navigational instruments used by Drake to plot his voyage round the world.

The Day or Overnight Living History themes allow children to dress up as crew members in Tudor sailors’ costumes. There are workshops on navigation and barber surgery; in the afternoon there are mock battles and gun-drill. The children are served biscuits and grog (apple juice).

The overnight version includes a Tudor dinner (vegetable soup and bread), sleeping on the gun-deck and a Tudor breakfast (bread and cheese). Whether you chose the paying themes or just an afternoon’s self guided visit, don’t miss the souvenir shop, where you can stock up on postcards, t-shirts and other gift items.

Thirty-three bridges span the Thames river in London. Each one has its own history and is worth seeing. This self-guided walk takes you to see nine historical bridges in central London.