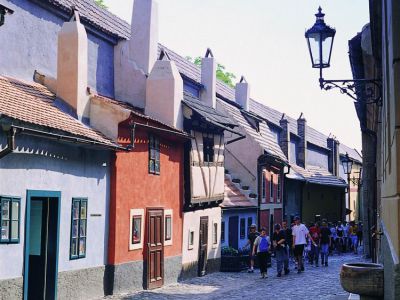 One of Prague Castle's most fascinating areas is, undoubtedly, Golden Lane, where you will find a collection of tiny houses, all brightly painted. There were once 24, built up against the castle's northern fortification in the 16th century. At first, they housed Rudolf II's marksmen and legend has it that he ordered them not to build houses that exceeded the wall's arches. Besides being small, they also were rather poorly made out of stone, mud, and wood and had to be regularly restored.

When the marksmen were moved to new lodgings, the tiny houses were given to various palace workers, including goldsmiths (which is where the name Golden Lane derived from); however, the most famous resident was the one and only Franz Kafka, who stayed at number 22 with his sister Ottla for a short time (a memorial plaque has been fixed to the wall).

The tiny houses were occupied until World War II, but already during the period of the First Republic, care was taken to ensure that the picturesque character of the Lane was not changed in the course of modifications. The eleven remaining houses have been restored, repainted and are now used to exhibit medieval armor, weapons and textiles, or have become souvenir shops and snack bars. The Lane ends at the prison-tower called Daliborka – a little gory in parts, with examples of torture instruments which are hideous (but part of history after all).

Why You Should Visit:
To see the last remainder of Prague Castle's small-scale architecture. No golden pavement, unfortunately, but plenty of cobblestones, colorful facades, a few small windows, and interesting histories.

Tip:
Buying a ticket will grant access to other parts of the complex, including the Prague Castle. If you'd rather not pay the ticket, you may still walk through the street after 5pm, although most houses and shops are closed by that time.