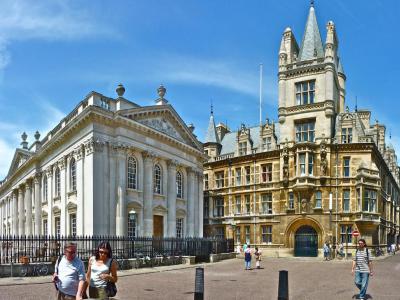 Gonville and Caius College is one of the oldest and most influential colleges within Cambridge University. Both Oxford and Cambridge Universities, Britain’s two most prestigious places of learning, are made up of affiliate colleges, such as Gonville and Caius. First established in 1348, the college is the fourth-oldest at the University of Cambridge and one of the wealthiest. It owes much of its success and development to the two men who give the college its name – despite the fact they lived two centuries apart. William Gonville founded the college but died three years later. Gonville Hall, as it was then known, moved to its present site shortly afterwards.

John Caius took over the running of the dilapidated college building in 1559, renaming it Gonville and Caius College. He restored and extended the buildings and created the elegant courtyards that still stand today, including Caius Court. Master of the college for 15 years, Caius was renowned for his unusual entry rules, barring the sick and infirm, as well as the Welsh, from studying here. While this rule has thankfully been abandoned, Gonville & Caius is still known for its strong traditions. Meals are eaten communally in the dining hall, often whilst wearing formal gowns. Specialising in sciences, particularly medicine, the college has several famous alumni, including Sir Stephen Hawking and broadcaster Sir David Frost. The college has been attended by many students who have gone on to significant accomplishment, including fourteen Nobel Prize winners, the second-most of any Oxbridge college (after Trinity College, Cambridge).

Why You Should Visit:
To enter and roam around the intimate, peaceful grounds and chapel – and you can do that for no charge.

Tip:
For around £50 you can sleep in an admittedly basic and ancient traditional room in one of the old courts of the main college. You may be woken earlier than you intended by the bells of the adjacent Great St Mary's Church. Included is a full English breakfast in the old hall, lined with paintings of former masters and of Stephen Hawking, the theoretical physicist.

Opening Hours:
Daily: 9am-2pm (Oct-Jul 6); Mon-Fri: 8am-12pm (Jul 7-Sep 30)
Please note that the college is closed to visitors during examination periods (the majority of Easter term) and short closure periods in the summer and at Christmas
Image by Chris Huang on Flickr under Creative Commons License.