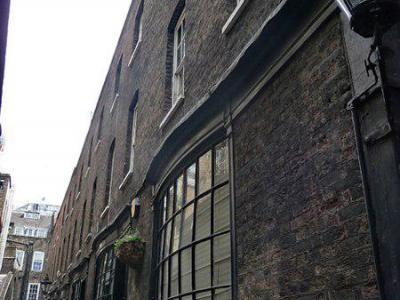 The London area of Covent Garden is full of tiny alleyways with small storefronts. One such little-known and hidden dark narrow passage, called Goodwin’s Court, is built into the frontage of The Theatre Goers Club of Great Britain, adjacent to 55-56 St Martin's Lane, just a stone’s throw away from Cecil Court and Charing Cross Road. A step into this lovely court, built circa 1627, takes you back in time to the Georgian period manifested in the typical bowed windows (remnants of the previously existent row of shops), polished black doors with shiny knockers and knobs with brass plates indicating the names of tenant businesses. There are three large, operational gas lamps illuminating the path.

*** Harry Potter Movie ***
Lined with topsy-turvy buildings, crooked houses, and bulging windows, this place is every inch Diagon Alley (or possibly its creepy evil twin, Knockturn Alley, depending on how cloudy the day is) and is definitely worth a wander if only to see the real street lanterns and darkly painted buildings that inspired the Warner Brothers-built props used in Harry Potter movies. Although not filled with wizard books, robes or wands, the black bay windows, the Godwin’s Court tunnel bears so much similarity to the actual film set that it can give you a case of shivers at the thought of stumbling across the likes of Bellatrix Lestrange or Lucius Malfoy apparating in the middle of the night!
Image by Stephen Richards on Wikimedia under Creative Commons License.