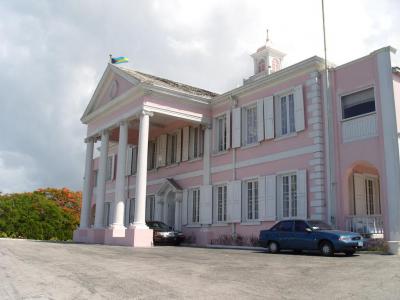 Government House is the official residence of the Governor General of the Bahamas. Built on a hill known as Mount Fitzwilliam and completed in 1806, this imposing stuccoed-coral-rock building on Duke Street is the Bahamian archipelago's foremost example of Georgian Colonial architecture.

In 1814, Colonel Don Antonio de Alcedo, a Spanish scholar and soldier, wrote admiringly of its effect. The Oriental Herald, in 1825, stated: "The new Government-House, standing on the centre of the ridge that overlooks the town, was built by a sum voted by the House of Assembly from the funds of the Treasury and cost upwards of 20,000l. It is built in the European style of architecture, and is universally considered the best building of the kind throughout the West Indies".

The building's original neoclassical aspect, as well as its stone construction, was directly influenced by the arrival of Loyalists from the southern United States in the 1780s. Previously most Bahamian buildings had been built of painted wood. Typically Bahamian elements, however, include louvered wood shutters and brightly painted exterior, in this case a brilliant shade of conch-pink. The primary façade, centered on a pedimented entrance supported by four stout Ionic columns, dates from the 1930s, when the building was remodeled following the hurricane of 1929.
Image by Crm18 on Wikimedia under Creative Commons License.
Sight description based on wikipedia

This sight is featured in a self-guided walking tour of Nassau, Bahamas within the mobile app "GPSmyCity: Walks in 1K+ Cities" which can be downloaded from iTunes App Store or Google Play. Please download the app to your mobile phone or tablet for travel directions for visiting this sight. The app turns your mobile device to a personal tour guide and it works offline, so no data plan is needed when traveling abroad.

Nassau is the capital of Bahamas and therefore offers several museums and art galleries for tourists to visit. The art work reflects the history, culture and the local way of life. As with many cities set on an island in the ocean, one of the most popular museums is the Pirates Museum. Nassau also provides a plethora of other outstanding museums such as the Museum of Art and Historical Museum.

Nassau – capital of the Bahamas – is a popular cruise-ship destination, renowned for its natural and man-made attractions. Apart from the beaches and colorful marine life, the city's other main lure is eventful history reflected in a number of typical pastel-colored British colonial buildings, such as the pink-hued Government House, the Pirates of Nassau Museum and others. To find out...  view more