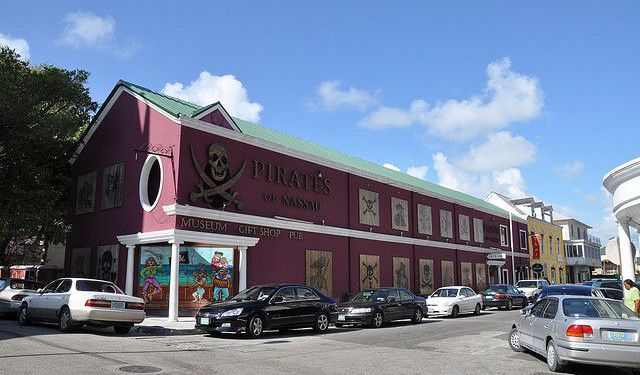 Nassau is the capital of Bahamas and therefore offers several museums and art galleries for tourists to visit. The art work reflects the history, culture and the local way of life. As with many cities set on an island in the ocean, one of the most popular museums is the Pirates Museum. Nassau also provides a plethora of other outstanding museums such as the Pompey Museum of Slavery & Emancipation and Heritage Museum of the Bahamas. Take this self-guided tour to visit the museums in Nassau and learn about the history of this island nation.
Image Courtesy of Flickr and ckramer.
How it works: Download the app "GPSmyCity: Walks in 1K+ Cities" from iTunes App Store or Google Play to your mobile phone or tablet. The app turns your mobile device into a personal tour guide and its built-in GPS navigation functions guide you from one tour stop to next. The app works offline, so no data plan is needed when traveling abroad.

The Bahamas Historical Museum is a non-profit museum. It functions as a popular tourist spot while preserving Bahamian material and culture. Exhibits span across 500 years with displays of art, artifacts, memorabilia, documents and photos.

Several model ships that show the maritime history of the Bahamas are on display in the museum. The museum also has antique furniture and archaeological remains from the island's early inhabitants.

The Bahamas Historical Museum is open from 10 AM to 4 PM Monday through Friday. It is closed on weekends and during the months of July and August.

The Nassau Public Library and Museum is both the oldest and the largest library in the country. It was founded by the Bahamas Society for the Diffusion of Knowledge in 1837 as a reading society. The institution became an official library 10 years later.

The jail was converted into a library in 1873. The prison cells are now used to hold documents, newspapers, charts, books, historic prints and Arawak artifacts. It also has computers with internet access that can be rented for a minimum of 15 minutes at a time.

The Nassau Public Library and Museum is open Monday through Friday from 10 AM to 5:45 PM and Saturdays from 10 AM to 3:45 PM. It is closed on Sunday.
Image Courtesy of Flickr and Roger W.
3

The Balcony House Museum is the oldest, still-standing wooden house in Nassau. Though there is no record of an exact date when the home was built, historical maps show its presence from at least the late-18th century. It is named for the prominent balcony that stretches along the entirety of the home's second floor.

Stephen Dillet, the first black member of the Bahamian House of Assembly, lived in the home in the mid-1800s. Dillet also served as inspect of the Nassau Police and justice of the peace.

The house was converted into a museum in 1992. It is appointed with antique furnishings and unique items that show the history of the Bahamas from the 18th and 19th centuries. The house also displays the Loyalist architecture of the period with its balcony and mahogany staircase.

The Pompey Museum of Slavery & Emancipation is named to honor Pompey, an enslaved person who lived on Rolle Plantation. Pompey led a revolt at the Rolle Plantation in Exuma in 1830 after plantation owner John Rolle ordered Pompey and 76 other enslaved people to move to another island.

Pompey fled the plantation and stole a sailboat, planning to sail for Nassau and petition the governor to be allowed to stay on Exuma island. Pompey didn't reach Nassau, but the British governor stopped the transfer. Pompey received 39 lashes from Rolle, but his rebellion was celebrated among enslaved people. The slave trade was abolished in 1834.

The museum is located in Vendue House, which was built in the 1760s. Vendue House functioned as a slave marketplace during the 18th and 19th centuries.

The small museum has a collection of photos and artifacts that describe the Bahamian slave trade and the daily lives of enslaved Bahamians. In addition, the museum features an exhibit titled Wade in The Water: Peter Mowell, the Last Slave Ship in The Bahamas. This exhibit looks at the events surrounding a slave ship that was shipwrecked in 1860 in the Abacos. The museum also discusses the 1834 emancipation.

5) Pirates of Nassau Museum (must see)

The Pirates of Nassau Museum is a fun interactive museum that immerses guests into the lives and times of Nassau's pirates. Visitors can board the Revenge pirate ship and go on an adventure through time.

The years 1690 through 1720 are known as the Golden Age of Piracy, and Nassau was known as the pirate capital of the world. Nassau was the heart of pirate activity as pirates could helm their shallow-draft ships through the waters of The Bahamas that were too shallow for larger warships. The pirates could then quickly access the deeper water trade routes that larger, slower ships used.

The museum presents its pirate history in an entertaining, interactive way. Visitors begin their pirate adventure on a recreated dock and shanty town before boarding the Revenge replica pirate ship. Onboard, visitors will learn more about pirate history and can practice their pirate lingo.

The museum displays different pirate living quarters, weaponry, and tools. In addition, the museum has exhibits detailing famous pirates such as Blackbeard and Woods Rogers. Visitors can also learn more about women pirates like Anne Bonny and Mary Reid.

In the Marooned exhibit, visitors can see what it was like for pirates who broke the pirate code and were abandoned. In the Flag Room, you'll learn that pirates would raise a black flag as they approached their victims.

The Pirates of Nassau Museum has an on-site restaurant, Smugglers, where you can enjoy local favorites like conch salad.

6) Heritage Museum of the Bahamas

The Heritage Museum of the Bahamas is a museum that offers collected items from prehistoric times to present day. The museum is located in the historic Mountbatten House. The home was built in the mid-19th century. It was restored to its original state by the Garzaroli family who wished to create a museum to honor the island nation's history.

Most of pieces in the museum are owned by British antiques collector Hamilton White. These items include fossils, relics and a 4.5 billion year old slice of meteorite. The museum is located on the upper flower of the house. There is also a gift shop onsite.

The museum is considered to be the foundation of Heritage Village. Along with the museum, tourists can visit the Heritage Village Artists' Studios where they can meet local artisans. These artists create jewelry, paintings, shell carvings and pottery. There are also photographers and shoemakers onsite.

The Heritage Museum was founded in 2014. It is open daily from 9 AM to 5 PM.
Image Courtesy of Wikimedia and BrokenSphere.
7

7) National Art Gallery of The Bahamas

The National Art Gallery of the Bahamas is a museum and art gallery that exhibits historical artifacts alongside pieces of art. The National Collection of Bahamian Art is held on the museum's ground floor while the collection of international art and temporary exhibits are located upstairs.

The NAGB Art Park is located adjacent to the museum. This is the site of the first African hospital in Nassau. It now has an outdoor sculpture collection that appears along a sculpture walk. It reflects the history and culture of the Bahamas.
Image Courtesy of Wikimedia and ArnoldReinhold.
8

Educulture Junkanoo is a museum that celebrates Junkanoo, a carnival-like parade experience in the Bahamas. The parade was a celebration for the freedom of slaves who were given days off during Christmas. It eventually became a grand parade with floats and live music that fill the streets.

Educulture Junkanoo, which is held in the repurposed Ivern House, is a museum that focuses on Bahamian culture and traditions. It honors the island while supporting local schools and offering educational opportunities. The museum is located next to the National Art Gallery of the Bahamas in the Ivern House.

The museum was founded by Arlene Nash Ferguson. It is located in a repurposed home that has each room staged in a different style of history and culture. Some of the items on display include costume pieces, traditional fabrics and music. There is also an interactive experience that allows visitors to dance and make traditional masks.

Educulture Junkanoo is open Monday through Friday from 9 AM to 5 PM.
Image Courtesy of Flickr and Lisa Jacobs.
Sight description based on Wikipedia.

Nassau is the largest city and capital of The Islands of The Bahamas. Over 70% of Bahamian residents live in this bustling city. Nassau is the country’s government, education, administration, and media center.

Nassau was founded in 1670 by British nobility who sought to settle New Providence Island. The British named the settlement Charles Town and built a fort to defend the new town against...  view more