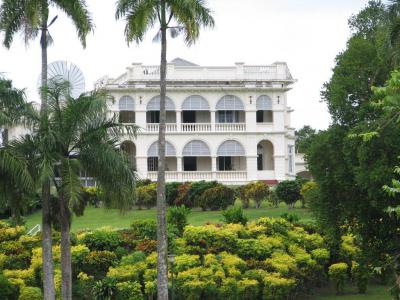 Back in 1882, as the government was preparing to move the capital from Levuka to Suva, it was natural that a fitting residence be provided for the governor. In a series of fits and starts the current incarnation of the Government House (also known as the Presidential Palace) was completed in 1928.

The architectural style was Georgian revival. Classic features include symmetry, refinement, harmony, and elegance, with new shifts in the materials used for construction. There are a range of structural elements such as verandas and Regency-style porticoes, pediments, decorative ornaments, parapets and arched balconies. Other Regency influences included the use of recesses around windows to cast shadows and divide the facade of buildings into panels, and stucco, which was used as an exterior wall finish. There also are shutters and stylized motifs. The roofs are side-facing gables with eaves.

A stoic-looking soldier or two are posted at the gate, which indicates that this building is most certainly off limits. The guards are clad in starched whites sulus, or sarongs, and red tunics. The changing of the guard is an event popular with visitors. To find out the best time to see it, contact Tourism Fiji for the schedule.

Opposite the Government House is a path along the seawall that makes a wonderful promenade.

While you’re in the neighborhood, don’t forget the “Bat Trees,” which are on the premises of the Government House, just behind the imposing fence that encloses the property. You’ll need to stroll about 200 meters past the sentry to find the trees. You can spot the Bat Trees any time of the day. Fruit bats, the denizens of the trees (also called “flying foxes”), are rather large, noisy creatures. The real show begins at dusk when scores of the bats come to life.
Image Courtesy of Wikimedia and Qiliho.