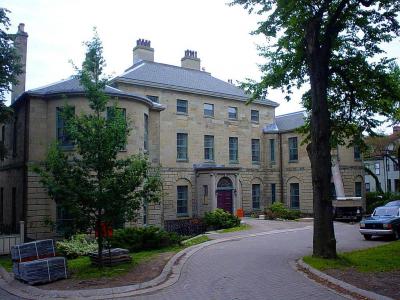 Government House's overall style is one of Georgian with hints of Adam, elements of the main and rear facades having been taken from a book of house plans published in 1795 by George Richardson, a former employee of Robert and James Adam. Many of the materials, however, were acquired locally; the stone came from Antigonish, Bedford Basin, Cape Breton, Lockeport, Lunenburg, and Pictou, brick from Dartmouth, and pine from the Annapolis Valley, Cornwallis, and Tatamagouche. Imported materials came from New Brunswick, Newfoundland, England, and Scotland; notably, the marble fireplace mantles were made in London. These adorned an interior arranged for both entertaining and state business, including a drawing room, dining room, and ballroom for formal entertaining, as well a suite for the Governor, his family, and servants. At the time, Nova Scotia had no equal in design and decoration.
Image by cphoffman42 on Flickr under Creative Commons License.
Sight description based on wikipedia