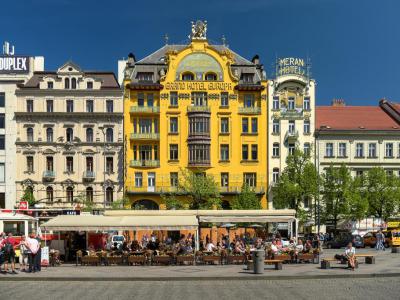 Sitting on the edge of famous Wenceslas Square, the Grand Hotel Evropa is one of the most remarkable architectural sights of Prague. Originally built in 1872 by architect Josef Schulz in the Neo-Renaissance style, on the site previously occupied by Bindra's coaching inn, it first went by the name U Archivévody Štěpána (“At Archduke Stephan”). In 1889, the building underwent reconstruction and, in 1903–1905, was further remodeled in the then fashionable geometric Art Nouveau style by architects Bedřich Bendelmayer and Alois Dryák, with the interior designed by Bohumil Hypšman, Jan Letzel and Ladislav Saloun.

In 1924, the hotel was bought by restaurateur Karel Šroubek, promptly renaming it Hotel Šroubek, and proved quite popular throughout Czechoslovakia and further afield as a very prestigious, luxurious and modern hotel of the time. Franz Kafka organized here his only author's reading in Prague in 1912.

In 1951, the hotel was nationalized and rebranded as Grand Hotel Evropa. Eventually, it fell into disrepair and, after 1989, was denationalized. In 2014, the hotel was one of the venues for the Designblok festival, called Superstudio Evropa.

Since 2016, Evropa has undergone reconstruction, with a new eight-storey building added in the courtyard, in a bid to expand its capacity, complete with conference facilities, wellness complex and panoramic restaurant.

The symmetrical Art Nouveau façade, richly decorated with plant motifs and a golden sculpture bearing a lamp in the shape of a globe symbolizing Europe, at the top, still retains some of the original charm. The exquisite ornate interior of the hotel has been popular with filmmakers and featured in a number of movies, including Titanic (1997) as a ship restaurant, Mission Impossible (1996) with Tom Cruise, and more.
Image Courtesy of Flickr and Jorge Franganillo.
Sight description based on Wikipedia.