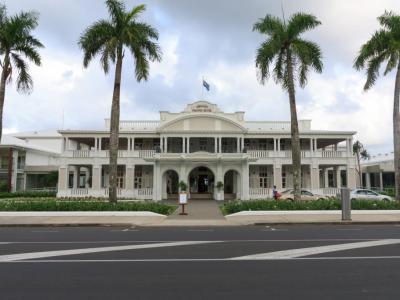 The site of the Grand Pacific Hotel was reclaimed from the a narrow fringe of sand, mud and seaweed that marked the spot. In a little over 40 years, hotel accommodation in Fiji was changed from the rough shack that passed for the “Suva Hotel” to an edifice that set the standard for the entire Pacific. Built by the Union Steam Ship Co. as a staging point for New Zealand- and Canadian-based shipping services in the North and South Pacific, the hotel opened in May 1914.

The design of the hotel followed that of the first-class accommodations in ships of the day. On one side, the bedrooms opened onto wide decks. On the other, they gave access to a balcony that looked down on the main lounge and dining room. Saltwater baths and shipboard plumbing were further reminders of the hotel’s architectural inspiration.

Sadly, in the 1970s and ‘80s, the grand old lady inexorably declined. The past glory was etched indelibly on its façade, but during those years, it morphed into a sideshow, a dissolute Victorian-era caricature where rooms were often rented by the hour.

What to do? Everyone seemed to have an idea, and ownership changed, but nothing substantial happened. Finally, in 1992, it shut down.

Fortunately, like a Phoenix, the place rose from its ashes after, in 2011, plans for its reconstruction were announced. A joint venture between the Fiji National Provident Fund, Papua New Guinea Superannuation Fund and Lamana Development PNG implemented the project taking pains to ensure accurate and “sympathetic” restoration of the building, with input from many sources, including the Fiji National Trust.

It’s not an exaggeration to say that those involved with the project did a magnificent job of restoration. Today the hotel is an icon once again.
Image Courtesy of Wikimedia and Matthias Süßen.