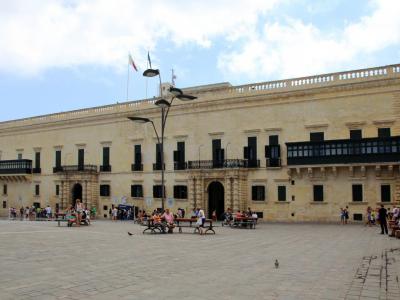 The Grandmaster's Palace, officially known as The Palace, was built between the 16th and 18th centuries as the palace of the Grand Master of the Order of St. John, who ruled Malta, and was also known as the Magisterial Palace. It eventually became the Governor's Palace, and it currently houses the Office of the President of Malta. Parts of the building, namely the Palace State Rooms and the Palace Armory, are open to the public as a museum run by Heritage Malta.

The main façade of the Grandmaster's Palace is built in the simple and austere Mannerist style, typical of its architect Cassar. The façade is asymmetrical due to the extensive alterations carried out to the building over the centuries. There are two main entrances on the façade, and they each consist of an arched doorway surrounded by an ornate portal which supports an open balcony. Long closed timber balconies wrap around the corners of the main façade. Both the portals and the balconies were added to the building in the 18th century. The building's exterior was originally painted in red ochre, a color used by the Order to mark public buildings.

Open to the public as a museum since 1860, the Palace Armory is an arms collection housed at the Grandmaster's Palace. It was the main armory of the Order of St. John in the 17th and 18th centuries, and as such it was the last arsenal established by a crusader military order. Although today only a part of the original armory still survives, it is still one of the world's largest collections of arms and armor still housed in its original building.

The Grandmaster's Palace is built around two courtyards, one of which is dominated by a statue of Neptune. From actual suits of armor found on the battlefields of Malta when it was attacked by the Arabs or Byzantines to swords and cannons, this is definitely a trip back into history!

Tip:
The armory can also be visited on a joint ticket with the nearby Palace State Rooms, which are full of history and beautiful to look at. To get to the rooms, there are four flights of stairs or a lift to take.