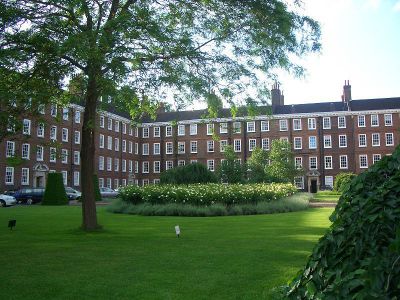 Established in 1569, Gray's Inn is one of four Inns of Court in London, the other three being Lincoln’s Inn, the Inner and Middle Temples. The Inn of Court is a professional association for barristers and judges where they undergo training and which allow them to practice in England or Wales. The Inn of Court is both a professional body and provider of office accommodation for many barristers.

Gray’s Inn is known for its gardens, or Walks, which have existed since 1597. The Inn itself dates back to at least the 14th century.

Charles Dickens briefly played with the idea of pursuing a legal career and, in May 1827, started working as a junior clerk of Ellis and Blackmore which had offices at Gray’s Inn. Whilst at Gray’s Inn, he learned the Gurney system of shorthand in his spare time, a skill that later proved invaluable to him as a reporter and writer. Dickens worked here until November 1828 when he left to become a freelance reporter at the Doctors’ Commons.

Dickens mentions Gray's Inn in several of his novels, including "David Copperfield" and "The Pickwick Papers".
Image by Chensiyuan on Wikimedia under Creative Commons License.