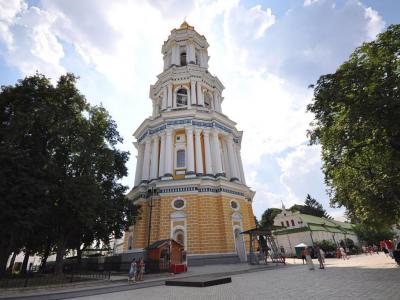 The Great Lavra Bell Tower is one of the most impressive elements of Kiev's skyline. With four tiers, each measuring 96.5 metres in height and seven metres in foundation, the Bell Tower is the main belfry of the Pechersk Lavra Historic-Cultural Preserve and its highest structure. It was built between 1731 and 1745 to a design by Johann Gottfried Schädel.

Each of its tiers is distinct. The first one is relatively simple, with eight metre thick walls to ensure a proper support. The second tier has 32 Doric columns; the third is decorated with 16, while the fourth one contains only eight columns. On the third tier is an observation platform from where visitors can admire a bird's eye view of the Ukrainian capital. Also there are bells, three of which (smaller ones) are originals that have survived since the 18th century. The fourth bell had to be replaced in 1903. The belfry's clock was engineered by A. Enodin, inspired by the Kremlin clock in Moscow. The bells chime every quarter of an hour, with an approximate 10 second precision.

The tower is topped by a golden gilded dome culminated by a Christian cross.
Image by Sergiy Klymenko on Wikimedia under Creative Commons License.