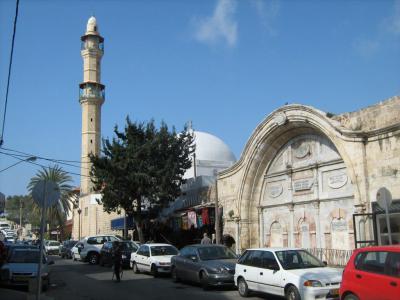 The third most important mosque in Israel after Jerusalem's Al-Aqsa and Hebron's Cave of the Patriarchs, Mahmoudiya was first built in 1730, with surrounding buildings, gates, and courtyards having been added in stages through the 18th and 19th centuries while Southern Syria was under Ottoman rule.

The courtyard welcomes you with its tranquil views of palm trees and colorful flowers, but the gates to the mosque proper are usually closed to visits unless they are pre-arranged. Interior decorations are intricate yet not too complex, with names of major prophets written on the corners of the two domes: Muhammad, Jesus, Moses, Abraham, Noah, and others.

While the mosque's exterior walls are largely concealed by shops, the tall and refined silhouette of the minaret is still prominent in what remains of the fabric of Old Jaffa and its surroundings.

Tip:
Don't miss the washing/purification/fountain area attached to the front the mosque facing the street. Free water was once a ruler's gracious gift to his people; nowadays, it's just nice to look at.
Image Courtesy of Wikimedia and Ori~.