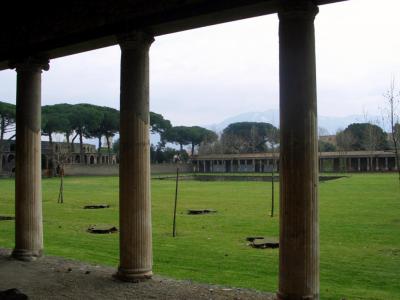 The Great Palaestra is a large rectangular building, flanked by porticoes on three sides, with a pool at its centre. Like many buildings in the city, it was commissioned under the empire of Augustus Caesar. It was used as an exercise complex by the youth associations which he set up, a Roman version of the youth branches of political parties we still see today. There was even a room, in the centre of the western portico, set aside for worship of the emperor. Behind the portico, a double row of sycamore trees provided a shaded area for attendees to relax and unwind.

The tree roots have been recreated with plaster casts. Like many natural organisms, from plant life to human beings, the roots were buried under the ash layers left by the deadly volcanic eruption, and decomposed. This left behind air pockets which were filled with plaster, creating exact replicas of the tree roots. At the time of the eruption in 79 AD the eastern portals and north wall were being restored, having been damaged in the earthquake of 62 AD. The complex even had toilet facilities – a latrine, served by water carried from the pool, can be seen on the south side of the building.
Image by TyB on Flickr under Creative Commons License.