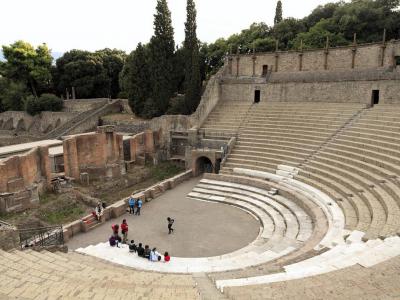 The Quadriporticus is a large four sided courtyard, flanked by colonnaded buildings. It resembles a larger version of the peristyle courtyards found in most Roman dwellings. There is some uncertainty over the function of the buildings here, although it is known that portions of the complex were used as barracks for the town’s gladiators. The courtyard was also used by the gladiators for training exercises, and was ideally located immediately next to the Great Theatre, where gladiatorial games were held regularly. It is shown in an ancient painting, now housed in Naples’ National Archaeological Museum, with a swimming pool in the centre of the courtyard. This may have been covered after the site was damaged in the earthquake of 62 AD.

Gladiatoral games are one of the most notorious rituals of ancient Rome, and have inspired paintings, novels and films throughout history. Graffiti carved by the gladiators in the columns of the Quadriporticus hint at public opposition to the violent games they took part in – and even call for wider condemnation. A large quantity of gladiatorial armour was also found at this site, including helmets, belts and shoulder protectors. They were marked with the letters NER, suggesting that the gladiators came from the Neroniam, Nero’s imperial school in nearby Capua.
Image by Radomil on Wikimedia under Creative Commons License.