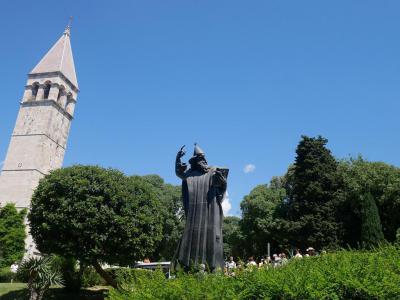 Gregory of Nin (Croatian: Grgur Ninski) was a medieval Croatian bishop of Nin who strongly opposed the Pope and official circles of the Church and introduced the national language in the religious services after the Great Assembly in 926, according to traditional Croatian historiography. Until that time, services were held only in Latin, not being understandable to the majority of the population. Not only was this important for Croatian language and culture but it also made Christianity stronger within the Croatian Kingdom.

The statue of Gregory of Nin by Ivan Meštrović in Split is a heavily trafficked tourist site in the town, which the toe of the statue shows. Rubbing the statue's toe is said to bring good luck. The statue was originally located in the Peristyle of Diocletian's Palace and can be seen in postcards of the pre-World War II period. During WWII, the statue was moved outside the city by Italian occupying forces. Currently, the statue sits to the north of the Palace and Old Town of Split, just outside the Golden Gate. There are also statues of Gregory of Nin in the cities of Nin, Croatia and Varaždin, Croatia.

Why You Should Visit:
Huge sculpture, almost 30 feet high and supposedly you rub the toe for good luck (one for the foot fetishists!) but really, it is better to appreciate this striking work from a bit of a distance.
Image by Stefdn on Wikimedia under Creative Commons License.
Sight description based on wikipedia

This sight is featured in a self-guided walking tour of Split, Croatia within the mobile app "GPSmyCity: Walks in 1K+ Cities" which can be downloaded from iTunes App Store or Google Play. Please download the app to your mobile phone or tablet for travel directions for visiting this sight. The app turns your mobile device to a personal tour guide and it works offline, so no data plan is needed when traveling abroad.