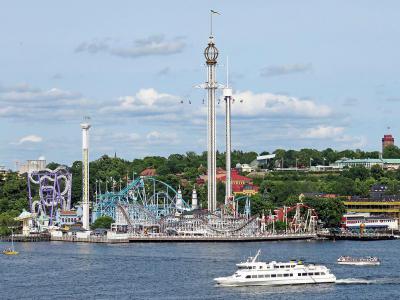 Grona Lund's roots are in the 1880s, making it Sweden's oldest amusement park. However the area has been used for similar purposes since the early 18th century. In 1883, a German by the name of Jacob Schultheiss rented the area to erect "carousels and other amusements".

The park's location is unique in the sense that most of the buildings are old residential and commercial structures from the 19th century. The buildings were not built for the park; instead, the park was built around the buildings. Its central location allows visitors to view large parts of Stockholm from the taller attractions.

Grona Lund features over 30 attractions, including roller coasters, carousels, a funhouse, a tunnel of love and more. The park is famous for hosting large concerts with stars like Bob Marley, Janis Joplin, The Boppers and more.

Tip:
Many famous bands/artists play here through the summer. Best value is if you buy the season access Green Card ('Grona kortet') that gives admission for the whole season (rides are extra). The card really pays off!
Image by Larske on Wikimedia under Creative Commons License.