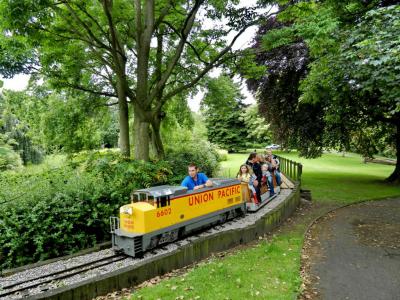 Grosvenor Park is a public park in the city of Chester. It consists of 20 acres (8.1 ha) of land overlooking the River Dee. It is regarded as one of the finest and most complete examples of Victorian parks in the North West of England. The land, which formerly consisted of fields, was given to the city by Richard Grosvenor, 2nd Marquess of Westminster. The Marquess also paid for the design of the park by Edward Kemp. It was laid out in 1865–66 and opened with great celebration in November 1867.

A number of cultural and horticultural events, including events in the Summer Music Festival, are held in the park. Also in the park is the Grosvenor Park Miniature Railway which was built in 1996 to commemorate the centenary of the Duke of Westminster's railway at Eaton Hall. It has a gauge of 7.25 inches (18 cm) and a circuit of 0.25 miles (0.40 km).
Image by Green Lane on Wikimedia under Creative Commons License.
Sight description based on wikipedia