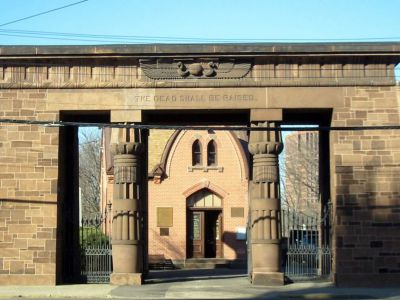 Grove Street Cemetery is a famous and historic cemetery surrounded by the Yale University campus. Despite its location, the cemetery is not owned by Yale nor is it part of the university in any way.

This cemetery was established in 1796 when a yellow fever plague caused a number of fatalities that was so large that the city's central burying ground would not suffice. Originally, the cemetery was six acres in size. More space was bought and converted into burial ground over the years that has allowed it to triple in size.

Several prominent New Haven citizens are buried in the cemetery, including former Yale University presidents, New Haven mayors and Connecticut Governors. Among the famous graves are the ones of Charles Goodyear, Eli Whitney and Noah Webster.

Grove Street Cemetery was named a National Historic Landmark in 2000. It has also been listed in the National Register of Historic Places since 1997.

*** Amistad Freedom Trail ***
Among those interred here are the active members of the abolition movement, as well as those associated with the African American history. A stone marker was dedicated by the Amistad Committee in September 2001 in remembrance of the six Mende African captives of La Amistad buried here.
Image Courtesy of Wikimedia and Ragesoss.
Sight description based on Wikipedia.