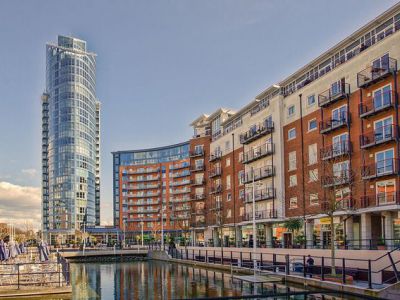 Gunwharf Quays is an outlet retail destination with 90 outlet stores and 30 restaurants, pubs and cafés located in Portsmouth, UK. It was constructed in the early 21st century on the site of what had once been HM Gunwharf, Portsmouth. This was one of several such facilities which were established around Britain and the Empire by the Board of Ordnance, where cannons, ammunition and other armaments were stored, repaired and serviced ready for use on land or at sea. Later known as HMS Vernon, the military site closed in 1995, and opened to the public as Gunwharf Quays after six years of reconstruction (which included the restoration of some of the surviving 18th and 19th-century Gun Wharf buildings). The landmark Spinnaker Tower, which also stands on the site, was opened a few years later.
Image by PRODerek Winterburn Follow on Flickr under Creative Commons License.
Sight description based on wikipedia