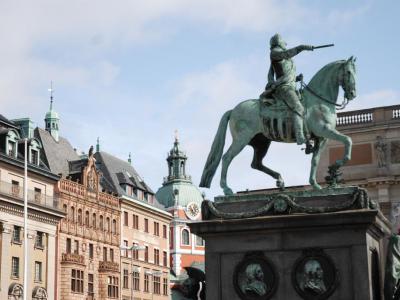 Located near the Norrbro bridge, at the intersection of Strömgatan, Fredsgatan, Malmtorgsgatan and Regeringsgatan streets in Norrmalm, is Gustav Adolfs Torg. The square is named for the Swedish King, Gustav II Adolf, who reigned from 1611 to 1632, and was known as “the lion of the North”. He died in Lützen in 1632, and for hundreds of years since has been remembered as a hero. The square got its name in 1805.

In the middle of it, there is a huge statue of Gustav II Adolf himself, created by the French-born, Swedish sculptor Pierre Hubert L'Archevêque (1721–1778). Molded in 1778, it was erected in 1791 being the first equestrian statue to be installed in Sweden. Guarding the sculpture are two bronze lions that have been in place since 1926. These are the copies of original pieces, sculptured as far back as the 300s, currently preserved at the Vatican Museums in Rome.

Apart from being a spectacular sight to behold, the square also serves as a geographical midpoint for setting distances to and from Stockholm, unlike many other cities in Sweden where distances are counted from a railway or bus station. Gustav Adolfs Torg is also home to the Royal Opera, Arvfurstens palats (seat of the Foreign Affairs Ministry) and the Ministry of Defence. South of the square are the Riksdag Building on Helgeandsholmen and the Royal Palace in Gamla Stan.
Image Courtesy of Wikimedia and Mstyslav Chernov.
Sight description based on Wikipedia.