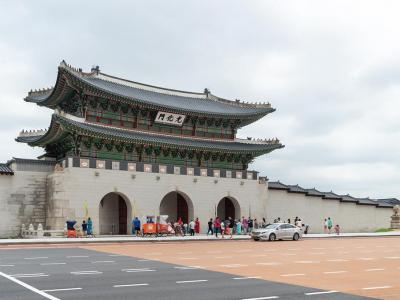 Gwanghwamun Gate is main entrance into Gyeongbokgung Palace, and so it is also the largest and most imposing of the four gates. It features three grand arched gates--the center gate was reserved for use by the king, while the crown prince and royal officials used the other two smaller arches.

The tall granite structure of the gate supports the ornately decorated wooden gate tower, which watches over the city. The pavilon housed a bell that announced the time of the day to the city. Two majestic Haetae sculptures guard the gate. These mythical lion-like beasts were stationed there to protect the palace against fire.

Gwanghwamun Gate was one of only four gates constructed in the palace walls. They were originally constructed in 1395 during the reign of King Taejo of the Joseon Dynasty. But the gates and walls have been through many cycles of destruction and reconstruction.

It was destroyed by fire during the Imjin Wars in 1592 and laid in ruins until it was rebuilt in 1867. In 1926, the Japanese government moved Gwanghwamun Gate. The double-roofed wooden pavilion on the gate was destroyed during the Korean War. The gate was moved again in 1968.

The area in front of Gwanghwamun Gate is known as Gwanghwamun Plaza. Here, visitors can watch the impressive royal changing of the guard ceremony. This ceremony is held daily, every hour, on the hour, from 10:00 to 15:00.

Tip:
The square housing the gate contains fountains, statues and sculptures that are also definitely worth seeing, plus an underground museum dedicated to Sejong the Great, the 4th king of the Joseon Dynasty.
Image by Tristan Surtel on Wikimedia under Creative Commons License.