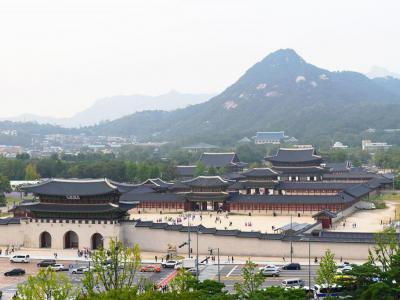 It was destroyed by fire during the Imjin War in 1592 and sat abandoned for over two centuries. In 1867, the palace was reconstructed with 330 buildings and 5,792 rooms. In 1895, Japanese agents assassinated Empress Myeongseong. Emperor Gojong, her husband, left the palace and never returned.

In 1989, reconstruction began to restore the palace to its former glory. About 40 percent of the building have since been reconstructed or restored.

Geunjeongjeon, the Imperial Throne Hall, is truly impressive. Its constructed mainly of wood and sits in a courtyard lined with stones. Known as rank stones, they indicated where officials of different ranks could stand during ceremonies. The entire courtyard is cloistered.

You can rent traditional costumes to immerse yourself in 14th-century royal Korea.

For a memorable experience, sign up for a night tour and see the palace lit up. Gyeonghoeru looks spectacular as its warm lights are reflected in the pond.

For a once in a lifetime experience, take part in a Gyeongbokgung Royal Dining event. Sample royal food and watch a traditional performance.
Image by 이상곤 under Creative Commons License.