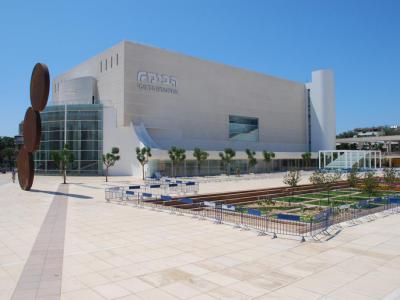 Named after Israel's National Theatre, HaBima Square is a great public space mixing minimalistic design with usability and effectively acting as one of the city's focal points. Although on New Year's Eve (Hanukkah celebrations) it usually buzzes with activities and performances for the entire family, most times you'll just want to have a break from exploring while taking in the surroundings.

Despite the landscaping design being fairly recent, this is the location where the first master plan of Tel Aviv – as proposed by Patrick Geddes in the late 1920s – envisioned a kind of a "modern Acropolis" that would stand for the city's cultural core; hence, the cornerstone of HaBima Theatre was laid here in 1935, and the Frederick R. Mann Auditorium (renamed in honor of Charles R. Bronfman in 2013) soon followed. In keeping with the Bauhaus/International style, the impressive buildings are a part of the White City and intended for preservation as UNESCO world heritage sites.

Take some time to explore the various aspects of the square, from the more intimate corners of the sunken garden (there's a nice tendency for classical music to be piped out of the small recessed flower bed) to the water basin and the many restaurants and coffee shops around. Try to avoid the sunny hours, however, as the glare of the sun and the white paving don't make for the best match.

Tip:
To the north of the square sits the Helena Rubinstein Pavilion, a 1959 Bauhaus-style building for temporary exhibitions of contemporary local and international art.
Image Courtesy of Wikimedia and StateofIsrael.