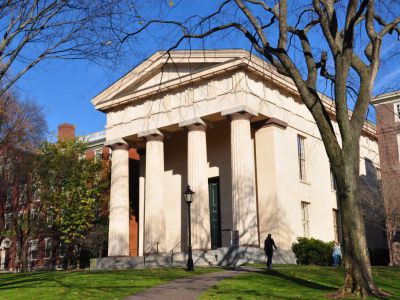 The Haffenreffer Museum of Anthropology is Brown University's teaching museum. The museum has a 2,000-square-foot (190 m2) gallery in Manning Hall on the university campus. Changing exhibitions in the museum’s gallery in Manning Hall, at the center of Brown University's campus, highlight the museum's collections from around the world and the work of Brown University faculty, staff and students. The museum also offers public lectures, performances, symposia, festivals, school activities, and a broad range of programs and events for all ages.

The Museum originated with the private collection of Rudolf F. Haffenreffer, who founded the King Philip Museum in the early 20th century on the Mount Hope Grant in Bristol RI, the former headquarters of Metacom, or King Philip, a 17th-century Wampanoag sachem. The Museum became part of Brown University in 1955 and opened its gallery on the Brown campus in 2006.

Operation hours: Tuesday to Sunday: 10 am - 4 pm.
Image by chensiyuan on Wikimedia under Creative Commons License.
Sight description based on wikipedia