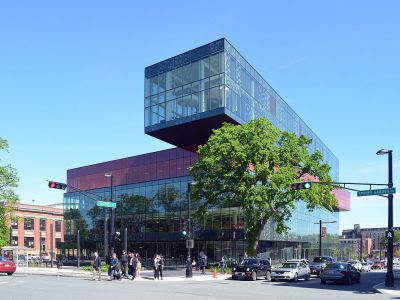 The Halifax Central Library is a public library in Halifax, Nova Scotia, Canada on the corner of Spring Garden Road and Queen Street. It serves as the flagship library of the Halifax Public Libraries, replacing the Spring Garden Road Memorial Library. A new central library was discussed by library administrators for several decades and approved by the regional council in 2008. Construction began later that year on a prominent downtown site that had been a parking lot for half a century.
The new library opened in December 2014 and has become a highly popular gathering place. In addition to a book collection significantly larger than that of the former library, the new building houses a wide range of amenities including cafés, an auditorium, and community rooms. The library won a Lieutenant Governor’s Design Award in Architecture for 2014 and a Governor General's Medal in Architecture in 2016.
Image by Citobun on Wikimedia under Creative Commons License.
Sight description based on wikipedia