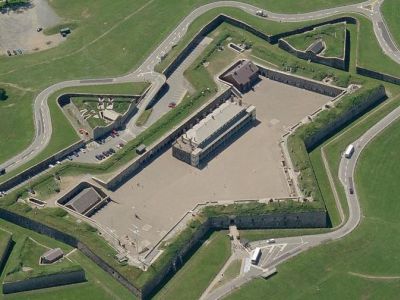 Halifax Citadel National Historic Site rests on Citadel Hill. The site was fortified in 1749 when the city was founded by the British. The Citadel was meant to defend Halifax Harbor and the Royal Navy Dockyard.

Four citadels have been built on Citadel Hill. The first came in 1749. It was a small redoubt, with a flagstaff and guardhouse near the summit. By 1761 its condition had deteriorated.

The second citadel was completed in 1776. It was a permanent fortification that could accommodate 100 troops. The British military presence in Halifax through Citadel Hill is thought to be one of the main reasons that Nova Scotia—the fourteenth British colony—remained loyal to the Crown throughout and after the American Revolutionary War.
However, poor construction caused the second citadel to fall into ruins in less than 10 years.

The third citadel was completed in 1796. It was larger than the previous two due to the oversight of Prince Edward, Duke of Kent. He had ordered the Citadel Hill be leveled in order to accommodate the larger space. This citadel lasted slightly longer than the others, but by 1825 it had fallen into disrepair.

The fourth and final citadel was built between 1828 and 1856. This massive masonry-construction fort was designed to repel both a land-based attack or attack from the water by United States forces. It was a star-shaped hillock citadel with internal courtyard and a clear harbor view from armored ramparts.

However the Halifax Citadel quickly became obsolete following the introduction of more powerful rifled guns in the 1860s. By the end of the 19th century, the role of the Citadel in the defense of Halifax Harbor had evolved as it was used as a command center for other, more distant harbor defensive works. It also provided barrack accommodations.

After the World War II, the fort began to decay but it was restored and opened as a living history museum and historic site in 1956.

Visitors can tour the Halifax Citadel throughout the year. They can expect different programs at the historic site depending on the time of year they arrive. From spring to fall, re-enactors are on the grounds of the Citadel portraying tradespeople, civilians and military forces from the late 19th century.

In the fall through Halloween, ghost tours are held at the fort. A Victorian Christmas celebration takes place every winter with crafts, games and Christmas carols.

The grounds are open throughout the year from 10 AM to 4 PM.
Image Courtesy of Wikimedia and Moneywagon.

Want to visit this sight? Check out these Self-Guided Walking Tours in Halifax. Alternatively, you can download the mobile app "GPSmyCity: Walks in 1K+ Cities" from iTunes App Store or Google Play. The app turns your mobile device to a personal tour guide and it works offline, so no data plan is needed when traveling abroad.

Between the impressive waterfront and colorful, bustling streets, Halifax is a picturesque city. Much of its fascinating history is duly reflected in the local architecture. There are a number of historical landmarks in Halifax, including the time-honored buildings, palaces, and churches, where you can learn much about its glorious past.

The presence of these historical locations is bound to...  view more

Halifax is located on the ancestral lands of the Mi'kmaq who lived in the area long before Europeans arrived. Mi'kmaq called the area "Great Harbor". The city itself was established by the British in 1749 in violation of treaties with the Mi'kmaq. The establishment of the city led to Father le Loutre's War, otherwise known as the Anglo-Micmac War.