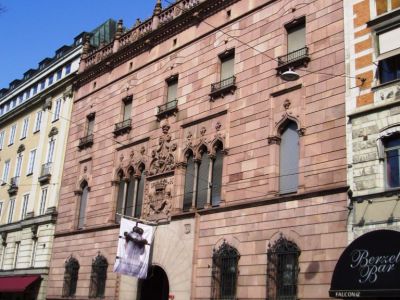 Hallwyl House (Hallwylska palatset) was built in 1893–1898 to the design by Isak Gustaf Clason for Count Walther von Hallwyl and his wife, Wilhelmina. It was created to accommodate the office of the count and the extensive art collection of the countess. Wilhelmina and Walther von Hallwyl also lived here during the winter. The countess collected artworks during her worldwide journeys in order to found a museum, and, consequently, the palace was donated to the Swedish State in 1920, a decade before her death, on the condition that it would remain unchanged. Hallwyl Museum (Hallwylska museet) officially opened in 1938.

Today, the property is maintained just as it was when Countess von Hallwyl donated it; well preserved rooms from the late Victorian era offer a glimpse into the lifestyles of the nobility in Stockholm at the turn of the 20th century. While the exterior of the building and the court are historical in style — borrowing architectural elements from medieval prototypes and Renaissance Venice — it was utterly modern upon its completion, fitted with electricity, central heating, telephones, and bathrooms. The elevator was a later addition.