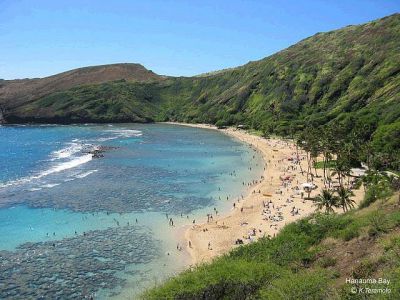 Hanauma Bay is a horseshoe-shaped bay located along the southern coast of Oahu. The bay itself is the product of a volcanic eruption; the formation of a low cone allowed for the bay's curved shape.

The name “Hanauma” is somewhat debated. The word “Hana” means bay. The “uma” portion of “Hanauma” may mean curved, or may come from the name of an old hand-wrestling game. In the past, the bay was used as a fishing and entertaining area by Hawaiian royalty. Archaeological findings suggest that Hanauma was used regularly by people, though the lack of a source of drinkable water means that it wasn't likely to have been the site of a permanent settlement. Because of the bay's shape, it was also used as a stopover point between the islands of Oahu and Molokai.

Today, Hanauma Bay functions as a nature preserve and conservation area. It is a nesting ground for green sea turtles, houses over 400 indigenous species of fish, and shelters a wide variety of coral. It also sees about 3000 visitors a day, which has resulted in some stringent measures to help protect the native flora and fauna in the area.

Why You Should Visit:
You pay a small entrance fee of $5 to have access to this gorgeous beach bay. Everything is well organized, too, including a video explaining proper beach etiquette. After this, you do a short walk down to the beach that is just absolutely scenic. It really feels like you have your own private beach! You can then rent your snorkel gear which you should absolutely do so you can explore all the green turtles and marine life that the coral reef has to offer.

Tip:
It may take a while to get comfortable using the snorkel gear and practicing how to breathe. If you think you will have major issues with this, consider bringing some kind of floaties or life vest so that you can swim further out into the ocean and really see the beauty that lies below you.
Image by skyseeker on Flickr under Creative Commons License.
Sight description based on wikipedia