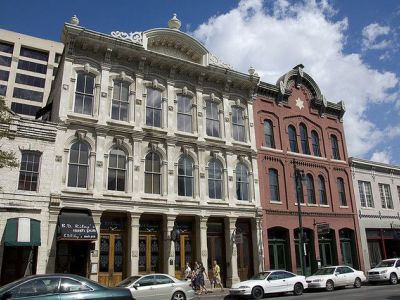 The Hannig Row Building is the second most notable edifice on 6th Street, after the Driskill Hotel. It was built in 1876 to the design by Jasper Newton Preston, and predominantly reflects Renaissance Revival style which was one of the two trends prevalent in Austin throughout the 1870s. The other trend, manifested in a simple commercial storefront seen in the neighboring Jacoby-Pope Building, constructed around the same time, was being fairly typical of what was built on East 6th Street and Congress Avenue during that period.

Contrary to it, the Hannig Building is highly decorative, designed by a trained architect, and was built at a greater cost than most Austin businesses of the era. The building received acclaim by the local press as an elegant contribution to the city, comparable to the Walter Tips Building on Congress Avenue. It is still considered to be one of Austin’s finest late 19th century Victorian commercial sites.

Its original owner, Joseph W. Hannig, was a German immigrant cabinetmaker, famous for his wine parties. He was also the fifth husband of Susanna Dickinson, the “Messenger of the Alamo”, who was one of the most noted women in Austin’s history. Their former home is located nearby at 411 E. 5th St., and is currently known as the Joseph and Susanna Dickinson Hannig Museum. The Hannig Building is a City of Austin Landmark and contributes to the National Register-listed 6th Street Historic District.
Image by Mister-E on Flickr under Creative Commons License.