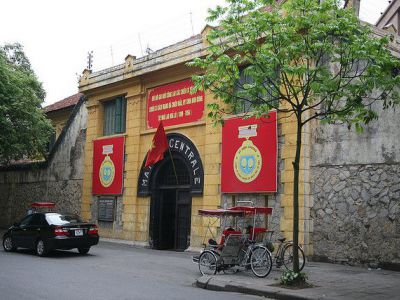 The Hoa Lo prison in Hanoi, sarcastically referred to as the Hanoi Hilton by American POWs in the 2nd Indochina War, is a vast prison complex built by the French in the style of the Maison Centrales a euphemism used for prisons in France. At first it was used as a prison, detention and torture center for revolutionaries struggling for independence from France. During the Vietnam War, the prison was used to house several American pilots whose planes were shot down by Vietnamese forces.

The Hoa Lo prison was built by the French between 1886 and 1901. Hoa Lo means fiery furnace or stove in Vietnamese. The facility was built to house 450 inmates. During the freedom struggle, the prison had more than 2000 Vietnamese inmates living in sub human conditions. Several tools of torture used by the French are preserved including a Guillotine used to behead early Vietnamese freedom fighters. From 1964 to 1973, the prison was a major POW detention facility and earned its name, the Hanoi Hilton. Well known inmates included Senator John McCain, the 2008 Presidential nominee of the Republican Party and Pete Peterson, who later became ambassador to Vietnam.

A small part of the original facility is preserved. The other part has now become a modern office and residential complex called the Hanoi Towers. Hanoi Hilton is located near the French quarter.