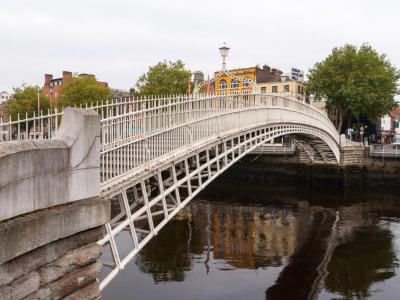 Commonly referred to as the Ha'penny Bridge, this white-picketed, cast-iron beauty is officially known as the Liffey Bridge. Upon its construction, though, the bridge was called Wellington (after the Dublin-born Duke of Wellington). Built in May 1816, it was the first pedestrian bridge spanning over the river Liffey in Dublin.

The bridge was cast in Shropshire, England and was meant to replace the seven ferries operating across the Liffey at the time, which were in a very bad condition. The Ha’penny nickname derives from a “halfpenny” charge levied upon the pedestrians for crossing it. Initially the toll was based not on the cost of construction, but to match the charges levied by the ferries it replaced. A further condition of construction was that, if the citizens of Dublin found the bridge and the toll to be "objectionable" within its first year of operation, it was to be removed at no cost to the city. Eventually, the toll was raised to a penny-ha'penny (1½ pence), until it was finally dropped in 1919.

Today, the Ha'penny Bridge is one of the prime landmarks of Dublin – appearing on postcards, tourism brochures, books and memorabilia.

For an even more unique & unusual experience, visitors may go on a kayak tour under the bridge with City Kayaking, which run all year round, and if lucky, even catch one of Dublin’s famous autumn sunsets. From time to time, there are also ‘Music Under the Bridge’ tours featuring some of the best musicians in Dublin performing under the bridges as people kayak down the River Liffey through the city.
Image Courtesy of Flickr and Nico Kaiser.
Sight description based on Wikipedia.