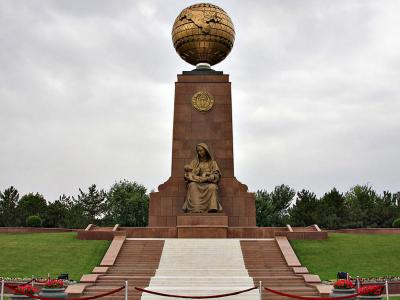 The successful depictions of politics with “a human face”, especially in the light of the concept of patriotism, are extremely rare in art. So much so, in fact, that managing such a combination is like putting together the incompatible sometimes. Yet in Tashkent they managed to achieve exactly that, 100%, in the form of the Monument to a Happy Mother.

Installed right in front of the landmark Independence Monument in the eponymous square, this six-meter bronze sculpture is simple and solemn at the same time. The ensemble features a seated figure of a Uzbek woman with a kind face and happy eyes, carefully holding in her arms a small child. The woman clearly appears eager to cherish her priceless treasure and to raise him worthy of his homeland.

But make no mistake – this monument is not the personification of “maternal warmth”, but is a purely political metaphor. The image of the woman symbolizes Motherland, while that of the child is interpreted as the country's people and their future.

The monument was created by sculptors Ilkhom and Kamol Jabbarov. Its installation, in 2006, marked the completion of the total remodeling of Independence Square complex.
Image Courtesy of Flickr and Allan Grey.