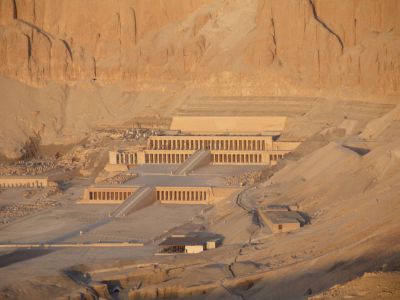 Hatshepsut’s Temple honors the memory of one of ancient Egypt’s rare female pharaohs. The site was also known as Djeser-Djeseru or “splendor of splendors”, which attests to the beauty of the temple. Hatshepsut was the fifth pharaoh of the 18th dynasty and ruled around 1503 -1480 B.C. She is considered to be one of the longest ruling and most successful female pharaohs. Hatshepsut was the daughter of Thuthmosis I and was married to Thuthmosis II, who died before she, the number one wife, could bear a child heir. Instead of stepping aside for the child of the second wife of Thuthmosis II, Hatshepsut assumed completed control as regent.

The temple is made up of three terraced courtyards where there were once avenues of myrrh trees planted. The wall reliefs tell of her divine birth and visits to the Land of Punt on the Red Sea. There were originally many statues of the queen as well as an avenue of sphinxes, but these were destroyed following her death by the succeeding Thuthmosis III, who may have been fearful of his claim to the throne. The temple was designed and constructed by palace official Senmut, who is widely regarded to have been her long term lover.
Image Courtesy of Wikimedia and Wouter Hagens.