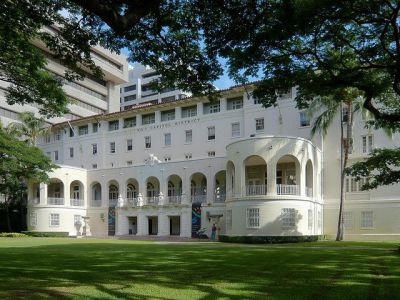 The site of the Hawaii State Art Museum (HiSAM) began its life as a hotel. American politicians John Mott-Smith and Charles Coffin Harris convinced the Hawaii legislature to build the Royal Hawaiian Hotel in 1872, and the hotel was converted to a YMCA in 1917. After that, it was used by the military during WWI. When the building suffered from severe termite damage in 1926, it was torn down, to be replaced by a Spanish mission design by Lincoln Rogers. The current building was completed in 1928.

The museum's exhibits are housed in three galleries. There is a permanent display of Hawaiian art, which portrays Hawaii's mix of cultural and ethnic backgrounds (including Hawaiian, European, and Japanese artistic traditions), and consists of 132 works of art by 105 different artists. These include sculptors Satoru Abe, Bumpei Akaji, Sean K.L. Browne, and Edward M. Brownlee, as well as ceramicists, printmakers, painters, and more. In addition to its permanent exhibit, it also has several temporary exhibits that change regularly.

Fans of the arts will find this facility up there with the Bishop Museum and the Honolulu Museum of Art on the list of top artistic hotspots on the islands. If you are interested, this well laid out and accommodating location is certainly worth spending some time out of the sun for.

Why You Should Visit:
If you like contemporary art, then this museum has a ton; a good complement to the nearby downtown art galleries.
Air-conditioned and with well-maintained restrooms, plus restaurant, so a great rest stop when exploring downtown on a hot day.

Tip:
The museum has a live show on the first Friday of every month (6pm); a family-friendly entertainment option on an otherwise rowdy night.
On the second Saturday (11am-3pm / Mar-Nov), you may find additional hands-on (often "make-and-take") activities appropriate for children.
Be sure to see the optical illusion art exhibit outside that has the appearance of a pool with water.

Opening Hours:
Tue-Sat: 10am–4pm
Free admission; leave a donation in the box, if you want.
Image by PeterWebb on Flickr under Creative Commons License.