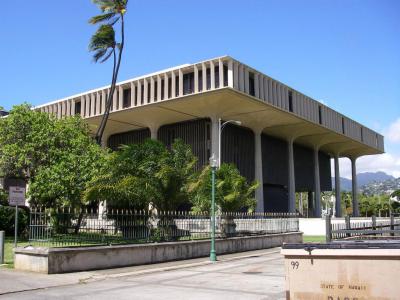 The Hawaii State Capitol is Hawaii's official capitol building, and is located in downtown Honolulu. It was created to replace the former capitol building, Iolani Palace, and was commissioned by the second Governor of Hawaii, John A. Burns.

Other notable features of the building and its grounds are several monuments. These include a statue of Queen Liliuokalani located in the Capitol Mall; a Liberty Bell; a statue of Father Damien, the Catholic priest who cared for lepers for sixteen years before his death, and was canonized by Pope Benedict XVI in 2009; and two monuments to honor Hawaiian members of the military.
Image by Xpixupload on Wikimedia under Creative Commons License.
Sight description based on wikipedia