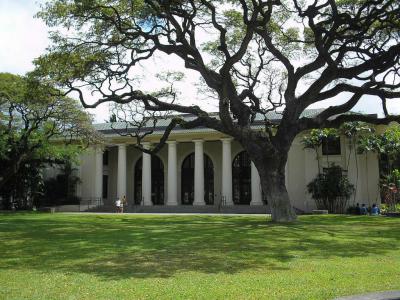 The Hawaii State Library is located adjacent to Iolani Palace in downtown Honolulu. This serves as the base for the Hawaii State Public Library System, which is the only statewide library system in the entire United States.

The building that houses the Hawaii State Library was designed by Henry D. Whitfield, Andrew Carnegie's brother-in-law, and funded by Carnegie himself. Construction began in 1911, and the building was finished in 1913. Before the library was built, the Honolulu Library and Reading Room Association provided library services to the community. Prior to 1959, library services were established separately for each island, with minimal oversight by the Library of Hawaii. In 1959, when Hawaii formally became a state, the Hawaii State Public Library System was developed. In 1978, the Hawaii State Library was added to the National Register of Historic Places.

Today, the Hawaii State Library holds more than 525,000 books, while the entire library system has over 3 million. The garden courtyard is decorated with an ocean mosaic by Hiroki Morinoue, the Edna Allyn Children's Room contains murals of Hawaiian legends by Juliette May Fraser, and the front lawn sports cast bronze sculptures by Barbara Hepworth.
Image by Xpixupload on Wikimedia under Creative Commons License.