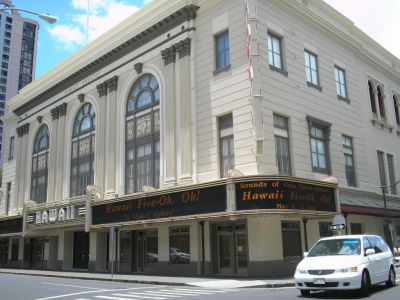 The Hawaii Theatre Center is located near Chinatown in downtown Honolulu. When it was first opened in 1922, it was called “The Pride of the Pacific,” and considered it on the same level as any theatre in San Francisco or New York.

The building itself was designed by Honolulu architects Walter Emory and Marshall Webb, and echoes elements of Neoclassical architecture for the exterior, and Beaux-Arts architecture for the interior. Exterior ornaments include elements of Byzantine, Corinthian, and Moorish designs, while the interior was adorned with Corinthian columns, a gilded dome, marble statues, carpets, silk wall hangings, and a mural by Lionel Walden. One really intriguing feature of the theater was its cooling system- vents under the seats helped to circulate air from an ice storage room located underneath the stage.

During its early years, the theater presented silent films and Vaudeville entertainment. Up to the 1960s, it operated as a movie theater. When the center of entertainment on the island began moving from Honolulu to Waikiki, the theater fell into disrepair, and eventually closed in 1984. Hawaiian citizens wanted to restore and preserve the theater, so they formed the not-for-profit Hawaii Theatre Center, purchased it, and performed extensive renovations. Their efforts were so successful, the Hawaii Theatre was named the “Outstanding Historic Theatre in America” by the League of Historic America Theatres.
Image by Joel Bradshaw on Wikimedia under Creative Commons License.
Sight description based on wikipedia