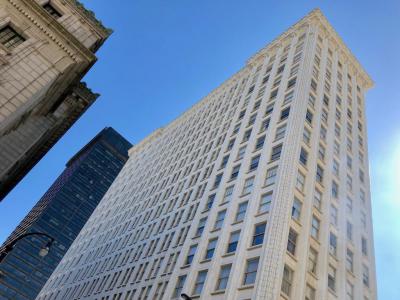 Often dubbed "The Queen of Atlanta", the Healey Building in the Fairlie–Poplar District was the last major skyscraper erected in the Capital of the South during the pre-WWI construction boom. On August 8, 1977, it was listed on the National Register of Historic Places, and since 1987 and has enjoyed local landmark status as well. 2001 saw the upper floors converted into condominiums, while the lower floors continue to be the home of galleries, shops, and restaurants. Anyone wanting to see a great example of adaptive re-use and rehabilitation of a landmark will enjoy a visit.

Part of downtown Atlanta's central business district, the Fairlie–Poplar Historic District is named for the two streets that cross at its center: northeast-only Fairlie and southeast-only Poplar. With smaller city blocks than the rest of the city (about half by half), and streets running at a 40° diagonal, Fairlie–Poplar contains many commercial and office buildings from the late 19th and early 20th centuries, including local interpretations of prevailing national architectural styles: Chicago, Renaissance Revival, Neoclassical, Commercial, Art Deco, Georgian Revival, and Victorian.

The district's buildings also represent the shift in building technology from load-bearing masonry and timber walls to steel and concrete framing. Other individual structures listed in the National Register of Historic Places that lie within Fairlie–Poplar include the Flatiron Building, Rhodes-Haverty Building, the Empire/C&S Building, the Prudential/W.D. Grant Building, the Retail Credit Company Home Office Building, and the Elbert P. Tuttle United States Court of Appeals Building.
Image by Warren LeMay on Flickr under Creative Commons License.