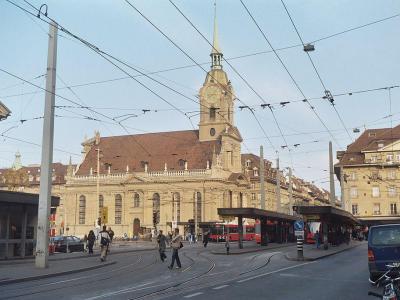 Conveniently located in the Old City of Bern, this beautiful church is a Swiss heritage site of national significance and one of the largest Swiss Reformed churches in the country. The first church on the site was a small structure built around 1228 which was replaced by a second church in 1496. The second church was demolished in 1726 to make way for the building you see today. During the 1726 construction, Roman religious objects were discovered under the foundation. From this find, it appears likely that the church sits on the site of an old Roman temple.

The first organ in the new church was installed in 1804 and was replaced in 1933 by a new one. The church has six bells – the oldest one was in 1596. The interior is supported by 14 monolithic columns made of sandstone and has a free-standing pulpit in the northern part of the nave. Especially notable are the old choir stalls, saved from the earlier church. Much like the St. Pierre Cathedral in Geneva, the Church of the Holy Ghost holds about 2,000 people and is one of the largest Protestant churches in Switzerland.

Why You Should Visit:
Without a doubt one of the prettiest churches (if not the prettiest) of the late Baroque period in Bern.

Tip:
There are organ concerts every Friday at noon, very nice to enjoy and relax. Free entry!
Image Courtesy of Wikimedia and Prui.
Sight description based on Wikipedia.