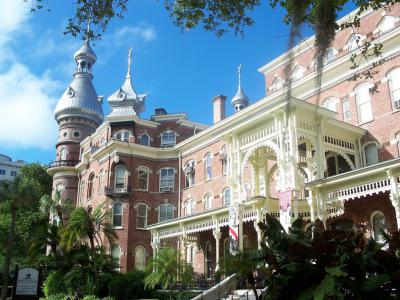 While Henry Flagler was building railroads and hotels along Florida's east coast, Henry Plant was doing the same on the state's west side. The Henry B. Plant Museum is situated in what is now Plant Hall on the University of Tampa's campus. The building was once Plant's Tampa Bay Hotel.

The Tampa Bay Hotel opened in 1891 at the end of Henry Plant's rail line. The resort was the crown jewel of the eight resorts that Plant planned to build around his various rail lines. It covered six acres and featured the first-ever elevator installed in a building in Florida. It had 511 rooms, each with electric lights and telephones, also a first in the state.

During the Spanish-American War, the hotel was used by the military as an operations base. Many enlisted men camped on the grounds, while high-ranking officials stayed in the rooms. Colonel Teddy Roosevelt and the Rough Riders even stayed at the hotel.

The hotel fell on hard times along with the rest of the nation during the Great Depression. After a brief closure in the 1930s, it was opened as the Tampa Bay Junior College's home, which later expanded to become the University of Tampa.

The south wing of the building is currently set aside to preserve the Tampa Bay Hotel's glory days. Much of the hotel's artifacts, including European and Oriental artwork and collectibles imported by Mr. and Mrs. Plant themselves, are on display.

The museum now hosts a variety of artifacts from the period, in addition to the building itself. You'll find exhibits on the Spanish-American War, Plant's railway and steamship lines, and the sports and adventures that drew tourists to Florida during the Gilded Age.

The Henry B. Plant Museum is on the US Register of Historic Places and is a US National Historic Landmark.

- Don't forget to check out the impressive grounds surrounding the former hotel, now known as Plant Park.
- Be sure to get the audio tour on your phone for a self-guided tour of the museum.